„The committee would be prepared to use its full range of tools, including altering the size and composition of its balance sheet, if future economic conditions were to warrant a more accommodative monetary policy than can be achieved solely by reducing the federal funds rate“.

Chairman Hensarling, Ranking Member Waters, and other members of the Committee, I am pleased to present the Federal Reserve’s semiannual Monetary Policy Report to the Congress. In my remarks today I will briefly discuss the current economic situation and outlook before turning to monetary policy.

Current Economic Situation and Outlook
Since my appearance before this committee in February, the labor market has continued to strengthen. Job gains have averaged 180,000 per month so far this year, down only slightly from the average in 2016 and still well above the pace we estimate would be sufficient, on average, to provide jobs for new entrants to the labor force. Indeed, the unemployment rate has fallen about 1/4 percentage point since the start of the year, and, at 4.4 percent in June, is 5‑1/2 percentage points below its peak in 2010 and modestly below the median of Federal Open Market Committee (FOMC) participants‘ assessments of its longer-run normal level. The labor force participation rate has changed little, on net, this year–another indication of improving conditions in the jobs market, given the demographically driven downward trend in this series. A broader measure of labor market slack that includes workers marginally attached to the labor force and those working part time who would prefer full-time work has also fallen this year and is now nearly as low as it was just before the recession. It is also encouraging that jobless rates have continued to decline for most major demographic groups, including for African Americans and Hispanics. However, as before the recession, unemployment rates for these minority groups remain higher than for the nation overall.

Meanwhile, the economy appears to have grown at a moderate pace, on average, so far this year. Although inflation-adjusted gross domestic product is currently estimated to have increased at an annual rate of only 1-1/2 percent in the first quarter, more-recent indicators suggest that growth rebounded in the second quarter. In particular, growth in household spending, which was weak earlier in the year, has picked up in recent months and continues to be supported by job gains, rising household wealth, and favorable consumer sentiment. In addition, business fixed investment has turned up this year after having been soft last year. And a strengthening in economic growth abroad has provided important support for U.S. manufacturing production and exports. The housing market has continued to recover gradually, aided by the ongoing improvement in the labor market and mortgage rates that, although up somewhat from a year ago, remain at relatively low levels.

With regard to inflation, overall consumer prices, as measured by the price index for personal consumption expenditures, increased 1.4 percent over the 12 months ending in May, up from about 1 percent a year ago but a little lower than earlier this year. Core inflation, which excludes energy and food prices, has also edged down in recent months and was 1.4 percent in May, a couple of tenths below the year-earlier reading. It appears that the recent lower readings on inflation are partly the result of a few unusual reductions in certain categories of prices; these reductions will hold 12-month inflation down until they drop out of the calculation. Nevertheless, with inflation continuing to run below the Committee’s 2 percent longer-run objective, the FOMC indicated in its June statement that it intends to carefully monitor actual and expected progress toward our symmetric inflation goal.

Looking ahead, my colleagues on the FOMC and I expect that, with further gradual adjustments in the stance of monetary policy, the economy will continue to expand at a moderate pace over the next couple of years, with the job market strengthening somewhat further and inflation rising to 2 percent. This judgment reflects our view that monetary policy remains accommodative. Ongoing job gains should continue to support the growth of incomes and, therefore, consumer spending; global economic growth should support further gains in U.S. exports; and favorable financial conditions, coupled with the prospect of continued gains in domestic and foreign spending and the ongoing recovery in drilling activity, should continue to support business investment. These developments should increase resource utilization somewhat further, thereby fostering a stronger pace of wage and price increases.

Of course, considerable uncertainty always attends the economic outlook. There is, for example, uncertainty about when–and how much–inflation will respond to tightening resource utilization. Possible changes in fiscal and other government policies here in the United States represent another source of uncertainty. In addition, although the prospects for the global economy appear to have improved somewhat this year, a number of our trading partners continue to confront economic challenges. At present, I see roughly equal odds that the U.S. economy’s performance will be somewhat stronger or somewhat less strong than we currently project.

Monetary Policy
I will now turn to monetary policy. The FOMC seeks to foster maximum employment and price stability, as required by law. Over the first half of 2017, the Committee continued to gradually reduce the amount of monetary policy accommodation. Specifically, the FOMC raised the target range for the federal funds rate by 1/4 percentage point at both its March and June meetings, bringing the target to a range of 1 to 1-1/4 percent. In doing so, the Committee recognized the considerable progress the economy had made–and is expected to continue to make–toward our mandated objectives.

As I noted earlier, the economic outlook is always subject to considerable uncertainty, and monetary policy is not on a preset course. FOMC participants will adjust their assessments of the appropriate path for the federal funds rate in response to changes to their economic outlooks and to their judgments of the associated risks as informed by incoming data. In this regard, as we noted in the FOMC statement last month, inflation continues to run below our 2 percent objective and has declined recently; the Committee will be monitoring inflation developments closely in the months ahead.

In evaluating the stance of monetary policy, the FOMC routinely consults monetary policy rules that connect prescriptions for the policy rate with variables associated with our mandated objectives. However, such prescriptions cannot be applied in a mechanical way; their use requires careful judgments about the choice and measurement of the inputs into these rules, as well as the implications of the many considerations these rules do not take into account. I would like to note the discussion of simple monetary policy rules and their role in the Federal Reserve’s policy process that appears in our current Monetary Policy Report.

Balance Sheet Normalization
Let me now turn to our balance sheet. Last month the FOMC augmented its Policy Normalization Principles and Plans by providing additional details on the process that we will follow in normalizing the size of our balance sheet. The Committee intends to gradually reduce the Federal Reserve’s securities holdings by decreasing its reinvestment of the principal payments it receives from the securities held in the System Open Market Account. Specifically, such payments will be reinvested only to the extent that they exceed gradually rising caps. Initially, these caps will be set at relatively low levels to limit the volume of securities that private investors will have to absorb. The Committee currently expects that, provided the economy evolves broadly as anticipated, it will likely begin to implement the program this year.

Once we start to reduce our reinvestments, our securities holdings will gradually decline, as will the supply of reserve balances in the banking system. The longer-run normal level of reserve balances will depend on a number of as-yet-unknown factors, including the banking system’s future demand for reserves and the Committee’s future decisions about how to implement monetary policy most efficiently and effectively. The Committee currently anticipates reducing the quantity of reserve balances to a level that is appreciably below recent levels but larger than before the financial crisis. 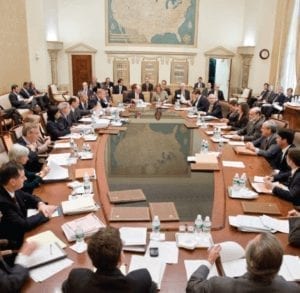