„Consumer sentiment rose in early February to its second highest level since 2004 despite lower and much more volatile stock prices. Even among households in the top third of the income distribution, the Sentiment Index rose to 112.8, the highest level since the prior peak of 114.2 was repeatedly recorded in 2007, 2004, and 2000. Stock market gyrations were dominated by rising incomes, employment growth, and by net favorable perceptions of the tax reforms. Indeed, when asked to identify any recent economic news they had heard, negative references to stock prices were spontaneously cited by just 6% of all consumers. In contrast, favorable references to government policies were cited by 35% in February, unchanged from January, and the highest level recorded in more than a half century.

In addition, the largest proportion of households reported an improved financial situation since 2000, and expected larger income gains during the year ahead. To be sure, higher interest rates during the year ahead were expected by the highest proportion of consumers since August 2005. Consumers also anticipated a slightly higher inflation rate, although the year-ahead inflation rate has remained relatively low and unchanged for the past three months. Purchase plans have been transformed from the attraction of deeply discounted prices and interest rates that outweighed economic uncertainty, to being based on a sense of greater income and job security as the fewest consumers in decades mentioned the favorable impact of low prices and interest rates. Overall, the data signal an expected gain of 2.9% in real personal consumption expenditures during 2018.“ 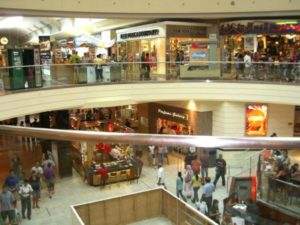 Westfield Garden State Plaza is a mall in Paramus, New Jersey.
By The original uploader was Nightscream at English Wikipedia – Transferred from en.wikipedia to Commons. Transfer was stated to be made by User:Strangnet., CC BY-SA 2.5, https://commons.wikimedia.org/w/index.php?curid=3038023