Traders of EURUSD and other euro pairs are taking a second look at last week’s European Central Bank transcript and deciding that the ECB president Mario Draghi made a rather large move after all, it seems. The sharp rally off the lows near 1.3500 last Thursday was, in part, likely to have been driven by nervous spot trading by those with large short-date options positions, as I discussed on Friday.

Now, as the dust has settled, it appears that euro bears are satisfied they still have a case. The important 1.3650+ and 200-day moving average resistance remained in place after a test post-ECB. And now it looks like the 1.3500 area looks will soon be under attack again. Those big round levels can often serve as magnets for considerable periods in EURUSD, particularly during a time of very low volatility. But let’s consider where the pair might head next if the 1.3500 level falls.

1.3300 – the next flatline support area of interest although I’m not satisfied it has much significance.

1.3000 – the most magnetic of all magnetic big round numbers in EURUSD’s modern history.

1.2750 – a monster support level that is far, far away, but it is the tripwire for a true bear market that might eventually run towards 1.2000. 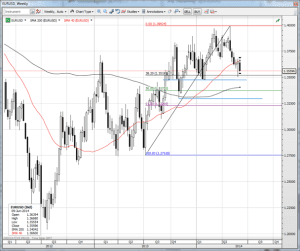 Traders should also look at the hourly chart and note that the 1.3575/85 area was rather important before the circus that unfolded around the ECB meeting.