Do not say I have not warned you about the dangers of Greece.

Far too much euphoria was generated over the fact that Greece has achieved a primary surplus. So what! The Greek government still had a mountain of debt it was obliged to pay off, as the debt burden stood at 175.10% of GDP.

I have no sympathy for investors that are squealing as the market bites back, taking the Greek 10 year benchmark to the brink of a 9.0% yield. 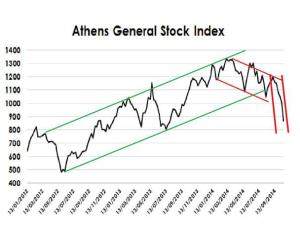 Earlier this year, I suggested that it was madness that the market had allowed Greece back into international capital markets at a time when it still required cash transfers from the troika (the International Monetary Fund, European Central Bank, and European Commission) to pay its bills. However, the investor appetite for yield was such that yields kept falling from 7.0% to around 5.75%.

I may have missed an investment opportunity, but I slept soundly and now the market is awash with cries of pain.

It is no different in the equity market where the Athens General Index has fallen below 900 for the first time since August 30, 2013. This collapse of over 8.0% in two days represents a decline of a scale that has not been felt since the dark days of the Eurozone crisis in 2009-2010.

With the results of the ECB’s Asset Quality Review and third stress test getting ever closer, Greek banks have been particularly hard hit. Greek lenders, who are still dependent on the ECB for much of their borrowing, have been hit by penal rates or “haircuts” on the assets they have deposited, that is Greek sovereign debt.

One has to say that the government deserves full marks for trying to appear sanguine about the financial market turmoil but that has not prevent the Prime Minister, Antonis Samaras calling an emergency cabinet meeting.

Several years ago I called for Greece to be shown the door from the “Club Euro”. This was not out of spite, but kindness. The nation could not take any further internal devaluation, and the government had delayed privatisation and failed to grasp the nettle of tax evasion.

This is a recipe for the political parties that oppose the draconian rules of austerity to rise once more in the electoral psyche and it would be no surprise to see Greece stagger toward an early election.

In the European Parliamentary elections in May the voting pattern, the victor was the far-left Syriza Party. It gained 26.58% of the vote and secured six members of the European parliament, gaining five on their number in 2009. If elected as a national government, Syriza says it will abandon the imposed austerity that underpinned it bailout cash and it will look to write-off 50% of outstanding debt.

Syriza would be quick to point out that even after all the internal devaluation, the level of debt relative to GDP has grown, not shrunk. In 2000 the level of national debt to GDP stood at 103.4%. As the Greek crisis began to ignite in 2009 it was 129.7%. Now its 175.1%. The figure has risen despite the massive cutbacks, because GDP growth has collapsed at a pace that far outstrips the reduction of the public account. GDP in Greece contracted 0.30% in Q2 of 2014 compared with the same quarter of the previous year. In fact GDP has been contracting since Q4, 2008.

Talk of Greece exiting its bailout programme is sheer fantasy. How can it be free of needing external support, if the dialogue between Athens and Brussels is that Greece might secure a further safety net of credit from Eurozone partners, if it manages to meet the strict terms required to exit its bailout at the end of this year?

Is it me that is wrong? If a nation needs special terms from friendly neighbours to keep its economy afloat, then it cannot be said to be free of requiring a bailout. This shuffling of euros from one pot to another makes me furious. How dare the bureaucrats and politicians treat investors like idiots!

Nor will I accept the view that this time it is different, as in 2009 there was a real risk that Greece would leave the Eurozone. That risk was never shielded by ECB president Mario Draghi’s 2012 outright monetary transactions, as Greece would not have been included in the programme. It may have gained on the back of talk of QE, but to be blunt the ECB has found it has the wrong calibre weapon to deploy, and it is firing blanks. There will be no QE as long as the ECB is at odds with the Bundesbank.

If there is a snap election, the only way that a central, pro-Euro, pro-bailout programme grouping could take power would be because the likely winners Syriza and the far-right Golden Dawn party are highly unlikely to work together. But such a government would have no authority and would be completely unstable.

The past two days have seen a dislocation between Greek bonds and German Bunds. That will open the sluice gates of a corrosive capital flight from Portugal, Spain and Italy. This comes at a moment when the ECB appears to lacking any credibility. There is no more time for Draghi to ask us to trust him to cook up another alphabet soup of mythical solutions. He has put up or he may as well shut up.

Right now with the Eurozone showing minimal growth, its main power house Germany starting to creak, and major nations such as France and Italy refusing to plan a proper budget, it is time for the Eurozone and ECB to show what it is made of in terms of substance not cosmetic gesture. If not, it may be that the rout of the past few days will the straw that breaks the euro camel’s back.